From the ZandaX Presentation Skills Blog

Articles to make you more effective in your presentations

Written by John B
The world has recently celebrated the 50th anniversary of the 1963 March on Washington, and Martin Luther King Jr's famous 'I Have a Dream' speech.

So, with all the televised coverage of it, as well as special commemorative programmes just about it, what can we learn from this about making speeches, public speaking and delivering presentations?

There are so many areas to learn from, such as his clear passion for the topic, the way that he used imagery that people could relate to (a cheque being returned Insufficient Funds being a great example), but the one that I think people can learn from the most is not even that apparent if you just watch the speech. It is something that you only pick up if you study the subject a bit. And what is that area? The fact that he did not plan to say what he did. He changed as he gave the speech!

So, is my lesson that you need to be flexible, and be able to react to your audience? That is always a good trait, but still not what I am talking about. 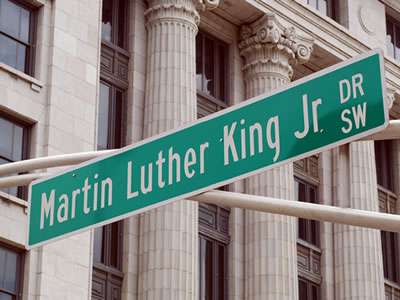 Studying King's speeches and life you will find that he created little "blocks". They might have been a paragraph long, or maybe a few paragraphs. But these were blocks that he had memorised, and used repeatedly, whenever he found it appropriate. It had been well written, and over constant use, repeatedly honed and improved. The block about his dream had not been intended to be in his speech that day. All the speeches had to be submitted in advance, and vetted. We know this because there had been stand offs about wording one of the other speakers was to use that day. So on that famous day in August 1963, he started with his planned speech. As the crowd responded to him though, he felt the need to change. And he could change, because he knew that he had the material. He had all of these blocks that he had written over the years, and could choose from what was most appropriate. He chose the dream block, and the rest, as they say, is history.

The night before King died, in 1968, he delivered another speech that has become one of the most popular of his speeches. He spoke about having been to the mountaintop, and seen the promised land on the other side. He talks about maybe not getting there with everybody else, but at least he has seen it. Many people talk about how prophetic this speech was, given just the day before he was shot. The fact is that he had delivered that same block many times before! It was one of his many blocks!

So, a lesson to learn from Dr Martin Luther King Jr is that you should prepare little blocks that you have memorised, so that if you do need to be flexible, you already have the capacity to do so. If you are in sales, your "elevator pitch" might be one such little block. If your speech or presentation requires for asking for some sort of action, whether it be people raise their hands, go up to the platform, fill out a form, or any other action, have that little block down pat. Then, as you change the content of your talk to different audiences, you can still use the same block for a call to action. Dr King wanted you to dream with him. I suggest that you prepare like him!


Next Article in the Series

Back to the Presentation Skills blog

Click a panel for great articles on business skills

Sales & Presentations
Great, easy-to-follow courses on how to succeed in sales and presentations

Learn how to sell more, to more people
Click here

Sales Management
Your Keys to Success are here!