Written by John Boddington
I often compare building relationships to building a bridge. You can imagine as the settlers in America moved west, they came across a river that needed to be crossed.

At first, they probably sent somebody over with a rope, and that turned into a rope bridge.

Then, over time, as it got busier, that may have been upgraded to a wooden bridge, then a much stronger one with brick, cement etc.

Now, the stronger the bridge, the more it can cope with. A rope bridge is not going to support an 18 wheeler trying to cross. 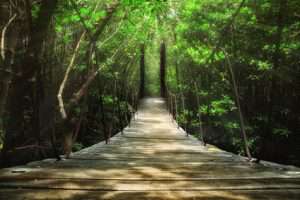 Similarly, a relationship that's only just started has less chance of surviving if something bad happens, than if you have a long history of things going well.

So, last weekend, while driving to a cottage for a couple of days away, I saw a road sign that said Weak Bridge ahead. Obviously, its a warning that you may not want to take too heavy a vehicle across.

But, what it really made me think about was relationships. And are all my bridges strong enough?

Even the healthiest connections could use a check-up, once in a while. And this doesn't need to be as drastic as counselling or a time out. It's about brushing up on the small things, but it can lead to big relationship rewards.

Here are five simple tricks for getting off on the right foot — and building stronger bonds —  with anyone. They can be employed in any interaction, and they don't cost a thing!

1. Teach yourself to listen better

This is the smallest act of generosity that we can display to an individual standing in front of us, and it builds a level of trust and dependability. We've all got those friends that we turn to when we're facing a tough time, and we love them for their listening skills!

Better listening helps to prevent those tricky talks in our relationships, as well as de-escalating them when they do happen, because it shows that we're receptive to the other person. But it's not always easy, in a world full of distractions.

In order to get to grips with the fundamentals of others — their interests and their values — it starts by simply paying a little more attention on a smaller scale. Learning how to actively listen; by turning to face your partner, directing your gaze, paraphrasing and asking questions, shows a genuine level of interest. And you'll learn something from each interaction.

Once you've mastered that, your counterpart will inevitably feel a lot more heard. And this can only do a relationship favours.

Anyone ever said; "I know there's something up with you, just tell me!"? Of course they have. Because, however good we all think we are at hiding things from our partners, or parents, et al; we're constantly giving off subtle clues as to what's going on under the bonnet — just by sitting a certain way. Or folding our arms across our chests, in a classic defensive move. 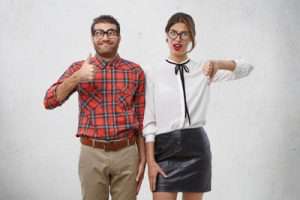 For those close, personal, relationships; letting down our physical guard — in the build-up to a conflict — can quickly improve the situation. Leaning into a conversation — in a non-threatening way, of course — and making eye contact with the other person, signals; "even though I might not like what you're saying, I'm willing to hear it".

The same is true in reverse. If we can see that our partner is feeling uncomfortable, we can place a reassuring hand on an arm, to signal our support. In a professional environment we might not want to grab our boss's arm; but using positive body language will show our colleagues that we're cooperative. And cooperation is the basis of a strong society.

Better body language doesn't just help us get out of relationship scrapes. It invites new connections to develop, through encouraging interaction instead of giving the, literal, cold-shoulder.

3. Know when to check your emotional baggage

We all share this planet. And that means that we have to make allowances for other people. Often. A key to building great relationships is knowing when to shelve your personal interests and emotions, to make room for understanding somebody else's situation, or feelings.

If relationships are a one-way-street, with one party always doing the cheerleading or consoling, someone will always feel left out or undervalued. A small-scale example that we all know is conversation hijacking!

In a really simple way, we can put ourselves second by not interrupting others. This also means not just waiting for someone to get their story over with so that we can tell our, better, version. It's about employing all of your listening (as above) and engaging skills and, only when you've really given the other person the floor, responding in a way that's not purely self-focused. Your counterpart really will thank you for it, and they'll be much more likely to want to keep the conversation going.

One of the things that separates our species is our ability to empathise with one another. And there's no greater connecting block than displaying that you're on the same emotional page as your partner.

Similarly to the previous point — instead of competing for airtime — learn to compliment your partner's conversation with the same tone of storytelling. Not in a way that overshadows, but in a way that demonstrates that you're engaged in their emotional state, and that you're feeling it too.

Mirror joy with joy, and all the rest. Not only is it a real buzz kill, when someone saps all of the fun out of another's story by changing the mood to a more depressive one; it's also effectively saying; "Yeah, yeah, OK". And it can give the impression that you really weren't listening.

Of course, nobody feels like skipping to work first thing on a Monday morning. Or belting out a tune in the midst of a hideous argument. But people gravitate towards those who exude positivity in life, far more than those who don't.In fact, positive thinkers tend to be some of society's most influential people. Think motivational speakers, teachers, politicians (most of the time!). To quote Richard Branson; "When you are positive, it rubs off on people and you help to create a more positive atmosphere. Equally, when you are negative, this also has an effect".

To bring it back down to bite-sized, conversational level; gossipy types — who choose to use negative language and like to talk up the bad in situations — don't fill others with the confidence that they're trustworthy. When we engage positively with the people around us, we give off an air of willingness to do good, and see others succeed. This can be something as tiny as switching the phrase "I'm not too bad", for "I'm really well thanks".

Other traits that people associate with positivity are; being humble — or displaying gratitude; living in the moment; being funny; being optimistic, and so on.

Who wouldn't want to surround themselves with that type of person?